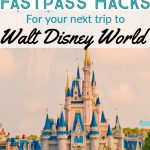 Everyone knows Disney World is a magical place. Less widely known is the sheer mass of knowledge required to get the most out of your trip. We recently got back from a 10 day trip to Disney world. It took us a good 5 days to REALLY figure out the secrets of the fast pass plus. I had read so many things online before our trip trying to be prepared, but I found my self still confused at times – and I didn’t read the top-secret game-changing tidbit that I will share with you in this post.

What is the Disney fast pass plus and how does it work?

Fastpasses allow you to skip the bulk of the line, technically some rides have a separate, shorter fastpass line but the point is you bypass the long wait. With fast pass plus, each person can schedule 3 fastpasses in advance in my Disney experience app. You get an hour block in which you can show up to the fastpass line making it flexible for scheduling meals, watching parades, etc. You can link all the tickets together and schedule the fastpasses easily together. Children under 3 do not need a fastpass reservation to ride the ride with you, assuming they’re tall enough.

Should you book all your fastpasses in advance?

I’m going to go against the grain here and tell you to relax, you’re planning a vacation after all. If you enjoy the scheduling then go for it set your calendar and book everything exactly 30 days out. I started to do this, most of the popular rides were only available in the afternoon. which meant mornings were fastpass-less. I found if I delayed by even 2-3 days many of the best rides where unavailable completely. So, after a few days of scheduling fastpasses, I decided to just do the remainder about a week before our trip. It was very stressful and needlessly so – as I will explain below.

THE BEST Fastpass Plus Tip!

I learned this tip on accident, by luck. I was riding the Kilimanjaro Safari ride and the couple behind us struck up a conversation with the couple beside them who were season pass holders. The non-season pass holder couple asked if they knew about the 3 pm thing. They had no idea. Neither did I, so I continued to eavesdrop. The couple had spoken with a different season pass holder that morning and found out a “game-changing tip” and said, “they just had to share.” A Disney Fastpass secret.

Every day at exactly 3 pm, Disney releases fast passes for their most popular rides. As long as your FastPass cue is empty, you can go into your My Disney app, hit refresh about a dozen times and grab a FastPass for rides that have a 3-hour wait. For example, I was dying to ride the Avatars flight of passage ride. I’ve been told it is THE best ride at Disney but the one was 3.5 hours long, we did not have a fast pass (there weren’t any available 30 days in advance either) and the line just wasn’t feasible with two toddlers in tow.

At 3 pm, we opened up the My Disney app and started to hit refresh. We saw a few other hard to get fast passes pop up like the Kilimanjaro Safari (which I HAD booked 30 days in advance). I thought we must have missed it. Then at 3.03 pm, we saw Avatars Flight of Passage! We booked two fastpasses for the ride an hour and a half from then! I was thrilled! Note that you should only expect to nab ONE hard to get fast pass per day because, by the time you use the fastpass, the others will be long gone.

With that tip in mind, the best thing to do is to schedule all your fastpasses to be concluded before 3 pm each day. The exception would be if you were able to book more than one hard to get a ride after 3 pm or will only be in the park for the evening.

After you scan your 3rd pre-scheduled fastpass you can immediately book another one – while in the line itself. We were able to spend entire days going from one fastpass from the next by using this method and we were there the week before Christmas when it was very crowded. So while we did struggle the first few days in our ignorance, once we had this system down, it was smooth sailing.

Some people see this as abusing the system. I have never done this personally and have mixed feelings because, on the one hand, it totally is – but on the other hand, sometimes between settling your kids, waiting in the fastpass line, riding the ride, then settling your kids again (maybe dealing with a tantrum in the mix) you end up cutting it REALLY close. So maybe it’s not abusing the system, your call. I did NOT do this for our pandora ride and my husband only made his fastpass by 10 minutes, it was a close one.

What has your experience been using the fast pass plus? If you have any more hacks to share let everyone know by commenting below!

RELATED POST: Is the Disney Memory Maker worth it?

Is Disneyland Paris worth it?

Airplane Toys For Toddlers Why pack toddler toys for the plane? I'm a big fan of screentime on planes for toddlers old enough to appreciate it....

Milan With Toddlers Disclaimer: The following is a drama-filled account of my very fun, week-long adventure in Milan where I tell you all about the...
Booking.com